Melissa has been talking about a Nintendo DS for months now, and was saving up her money. It was very slow going, because she just can’t manage to get her chores done on time, even though she has the whole week do do them. And, if the chores don’t get done on time, she doesn’t get paid.

On Friday, and nice little bonus tax refund was deposited into our account, and Greg suggested using part of it to get the girls each a Nintendo DS and a game. We kept it a surprise and took them to Best Buy yesterday morning… which Melissa was sooo happy about, because she loves Best Buy about as much as Home Depot, Lowe’s, or Fry’s Electronics.  So we get there and I tell her that she could go look at the DS’s and see what kind of games they had, and she was a little happier about being there. After they browsed through the games for a while, Greg asked if they picked one out yet, and told them to pick a game and a DS. Melissa was in total disbelief but didn’t waste any time grabbing what she wanted.

At home, Greg got the Nintendos all set up and plugged in to charge the batteries, and after Melissa got her chores done, they both got to play. Unfortunately Sara’s has to be returned because the touch screen stopped working. Don’t know what happened…. it worked for a while, and then Greg tried to play with the settings, and you couldn’t do anything on it anymore. 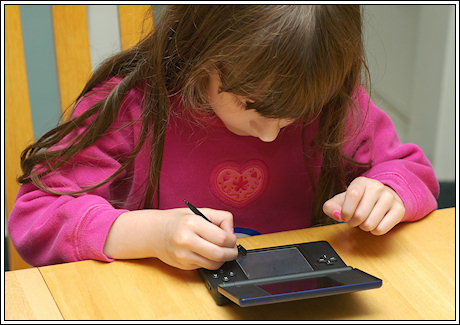