Melissa built Spongebob out of Legos. 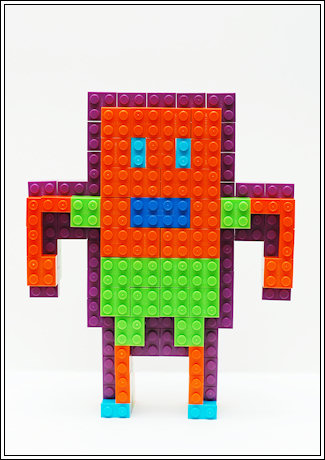 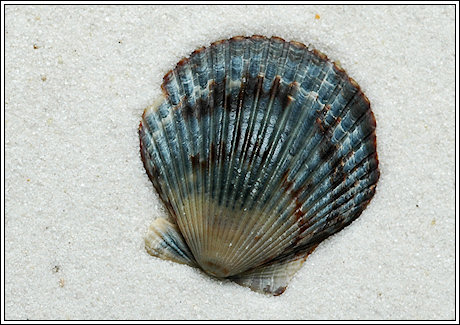 My baby is growing up… she likes to make her own lunch now, and last week I caught her pouring milk into a cup – from a gallon jug that was still almost full!!! (Yep, she’s quite strong, too!). She didn’t even spill a drop! But here she is, standing on her little step stool, spreading mayonnaise on her bread. All by herself.

I know, I know, I’m a little late today. I can blame it on Greg, though, because I was waiting for him to send me the picture for today’s post. He’s in NYC right now (coming home tonight) and he went to B&H this morning to take a picture for me. How I wish I could have been there!!!

He was there long before they opened and unfortunately hell won’t freeze over in time for him to go back and pick up a little D300 surprise for me. Those sweet husbands who surprise their wives like that are all taken by other women! If he does find his way back there during business hours, he’ll probably bring me back a magnet that says: My husband went to B&H and all he bought me was this stupid magnet.

photo by Greg B.

Saw these flowers on our way back to the car after we ate dinner at The Olive Garden on Saturday. I don’t know what they are, but I thought they were really pretty.

I think the class clown was ready to go to school this morning….

Summer is officially over and today Melissa starts 7th grade, and my baby starts Kindergarten.

We did a little practice run yesterday, and I got the kids up early and pretended to get ready for school. Everything went well, and they were ready in plenty of time. Also did some last minute school shopping, like velcro-closure shoes for Sara, until she learns to tie her shoes.

Melissa says she’s not excited about school. She will be at a new school this year, and when we went to pick up her schedule, we went to find her locker and all her classrooms, and everything is all in the same area, so she shouldn’t get lost. She has a map of the school, too.

Sara… she can’t make up her mind whether or not she’s excited. One minute she says that she can’t wait for school, and the next she says that she’s going to miss me and wants to snuggle all day instead of going to school. I think she will be fine once she’s there. I hope!

This picture was taken last Friday, at meet the teacher night. Sara will be in a class of 12 girls and only 5 boys, and her teacher seems really nice. She said I could walk Sara to the classroom the first few days, and then to the cafeteria (if she’s there before 7:20 am – school starts at 7:30 am!!) for a few days after that. I think by then she will know her way around the school to find it by herself. 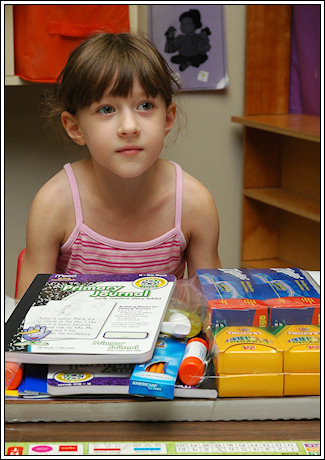 Today is Melissa’s Birthday…. hard to believe that my little girl is 12 years old today, and starting 7th grade on Monday. Seems like just yesterday that she was this tiny baby. She was our little surprise, who came along about two years earlier than “planned”, and looked like a Precious Moment when she was little. Almost everyone commented on that.

She’s very excited about today (can’t imagine why?!) and I’m surprised that she’s still sleeping right now, at 6:45 am.  We don’t have much planned today. Cake and presents when everyone is awake, and Melissa wants to go to the Olive Garden for dinner tonight. We got her a Build-a-Bear gift card, and I’m sure we’ll have to stop there either today or tomorrow. 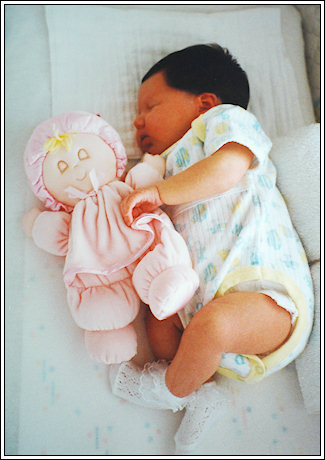 (this pictue was taken on her due date, September 12, 1996 with her very first doll. Who knew she would prefer stuffed animals!)

From Wikipedia: Tilt-shift miniature faking is a process in which a photograph of a life-size location or object is manipulated so that it looks like a photograph of a miniature scale model. By distorting the focus of the photo, the artist simulates the shallow depth of field normally encountered with macro lenses making the scene seem much smaller than it actually is. Many miniature faked photographs are taken from a high angle to further simulate the effect of looking down on a miniature. 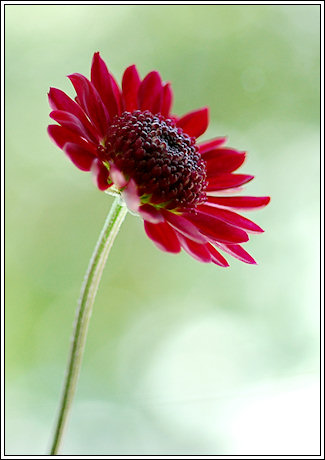 Melissa’s birthday is coming up and she decided on a rollerskating party. And, since there is now way she will let me take a picture of her for the invitations, I decided to dig out her old skates instead. This particular photo is an invitation reject, but I liked it anyway. 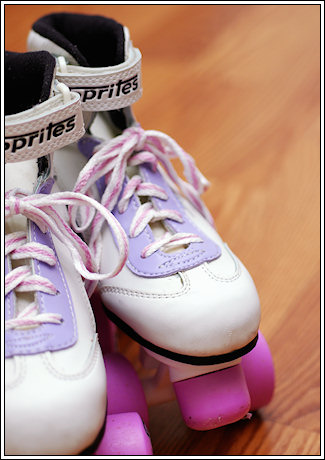 We went to the mall with friends the other day and the kids had a great time, playing in the little stream that’s there. Not that you can tell that by the picture!! At least one of them is halfway smiling. 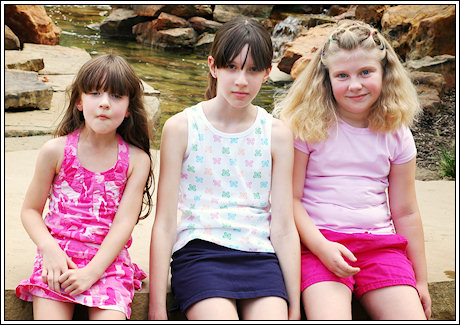 Sara saw me take pictures of our little tigers and had to go and get her toy camera to take her own pictures. She even tried some different angles and then showed me the pictures on the (pretend) LCD.

Lions And Tigers And Bears, Oh My! 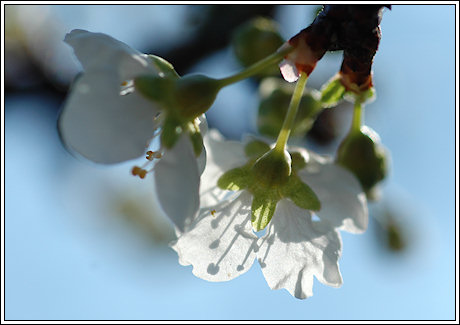 Sara drew this for me yesterday, all by herself, just by looking at the picture on the card.