My brand new 2009 Hyundai Santa Fe GLS, deepwater blue, gray interior.
Of course that means my post yesterday was a last good-bye to my Rogue 😦

We bought the Santa Fe on Saturday, but the dealership didn’t have it in stock and expected it in on Monday. Unfortunately it wasn’t ready Monday evening, so we headed over there on Tuesday after dropping the kids off at school.

Car buying is always a pain-in-the-you-know-where, and I dread it, but this has been so much better than our experience at Nissan of McKinney (seriously, D/FW people, don’t buy from them!!! EVER!! I wouldn’t even take a car from them if they gave it to me for free!).
Our sales person was nice, although we called him a couple of times on Monday and never heard back. We worked out a fair price on the new car, and the trade-in. They didn’t offer us as much as we had hoped, and we asked for $2000 more than their first offer, and settled for $1000 more. We were OK with that. What we were not OK with, was the 6.99% interest rate, but that was something to take up with the finance guy. Finance people are the worst, and this guy was no exception. Nice guy, really, but he just did not know when to quit! He insisted on explaining in detail what the extended warranty, gap insurance, some kind of tire/wheel warranty, window etching, protective clear coat, and all that other cr*p means, even though we told him right from the start that we were not interested. It’s all dealer profit!!
He avoided the interest rate as long as he could, but there was no way we were signing any papers when we had a much better interest rate on the Rogue. He lowered it by a little bit, but added all the “extras” back on. Um, did we not tell him no? We actually started to walk out of his office, and he was quick to get us to sit down again. He lowered the interest rate a little more, added the “extras” again, and tacked on three more months to the loan!! Again, we start to walk out, and finance guy jumps up, asks us to sit down, because he was going to talk to his boss. Off he goes into the office next door (separated by a glass wall) and they both come back a few minutes later. Boss guy tells us USAA is at 5.85% and he can give us that rate, without any of the extras and without adding the extra three months. We agree and sign the papers. There! Was that so difficult? We had this poor guy shaking in his boots – literally!! His hands were visibly shaking when he tried to feed that paperwork into the printer. It was pretty funny 😀
We were finally on our way home and they were going to let us take one of their cars, but I insisted on taking my Rogue so we could clean it out without feeling rushed. Besides, I couldn’t just leave it there when we didn’t have the new car yet.
But here comes the fun part… Greg called our bank Monday morning and applied for a new car loan and they approve us for 4.69%!  Greg calls finance guy several times and when he finally got a hold of him, was told that he was going to talk to his boss and call back. Never heard from him. Tuesday morning we show up and I ask him if they were going to match the bank’s offer or if they wanted us to take the loan from our bank. Of course he had to talk to his boss again and after what seemed an eternity, we’re told that the new paperwork was ready to sign. They didn’t match the bank’s offer, they beat it!!! 4.19%!! Now even though we were upside down on the Rogue, with this interest rate and the deal we got on the Santa Fe, our payment is actually less than the one we were making on the Rogue! Definitely something to be happy about.
Soo… here’s BJ (why BJ? Because we were at BJ’s Restaurant when Greg told me about this thoughts of trading in the Rogue.) 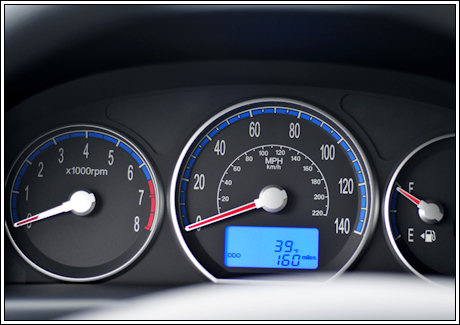 I do like the Santa Fe, but I miss my Rogue. I loved that car, and it really was a great car, except for the fuel level sensor that was always off, and Nissan being unable to come up with a fix in the year and a half that we’ve had the car.
I’ll miss the 6 CD changer and Bose sound system (sounded really great, cranked up to 15 or 18 – only did that when I was in the car by myself). The Rogue had some “get up and go”, too, but the Santa Fe is bigger and heavier, so it makes sense that it’s a little slower. I’ll miss the enormous glove compartment, too. We always had the manuals in there, but I could still fit my camera in there, too, even with the big lens attached!!
Greg keeps telling me that it’s a good thing that we traded in the Rogue, and he’s probably right, but I still miss it. (The Rogue was more photogenic, too! 😉 )

The schools were closed on Friday (February 12, 2010) and Greg worked from home that day, and since he didn’t have any conference calls until later, we all went for a walk in the snow.
Melissa kept saying that the trees looked fake, with all the snow on them 🙂
And Amber, I don’t know if you recognize the last one… that’s where we photographed the spider lilies last fall, or threw wild onions at each other last spring!