Saturday before Memorial Day, we decided to head to McAlester, Oklahoma. Why McAlester? Because of Whispering Meadows Winery. It’s close to home, only about 3 hours away, and we stopped there last year on our way back from vacation, and bought some really good wine.
Greg wanted to leave Saturday, but I talked him out of it. It was already afternoon, and I didn’t want to rush, getting some things packed, so we decided to leave Sunday morning. Greg did book a hotel room at the Holiday Inn Express. Unfortunately minutes later, we found out that the winery is closed Sundays and Mondays. Oh well, it would still be nice to get out of town, and we were sure we would find something to do. Besides, we needed a good reason, why the kids were missing school on Memorial Day, which was supposed to be one of the snow make-up days.

We left around 9 am on Sunday morning and stopped at the Oklahoma Welcome Center to pick up some brochures. We found a listing for Dewgul Berry Farm in one of them, and since it wasn’t too far out of the way, we decided to stop. Only problem was that we couldn’t find it! There were no signs, nothing looked like a berry farm, and the GPS didn’t recognize the address. I think those Okies are making things up for their travel brochures!
We got to the hotel around 1 pm, which was a little early to check in, so we went in search of a park, and found one, and the kids got to swing for a little while. Our room was ready at 2 pm. We got a suite, which was soo nice! The kids were especially happy, because they each got their own bed and they didn’t have to share one, and most importantly, they didn’t have to sleep on the sleeper sofa!
We relaxed for a little while and then went down to the pool. If you look at the pictures on the hotel’s website, the pool looks HUGE! Well, it wasn’t! Someone was smart and used an ultra wide-angle lens for those pictures! The water was freezing cold, but the kids had fun anyway. Melissa was busy, saving the beetles that were floating in the water. Everyone needs a hero! 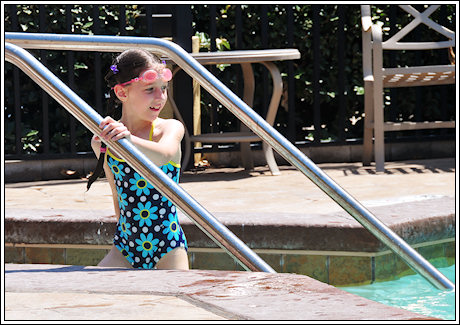 There was a Chili’s within walking distance of the hotel, and we walked over there to eat dinner. Afterwards we planned on playing some miniature golf at Speedline Entertainment (found in the McAlester travel brochure). They were supposed to be open until 9 pm, and we had a good two hours to play. The problem? They were closed!! Told you those Okies are making things up! Oh well, we killed some time at Wal-Mart (exciting, isn’t it?), picked up some dessert, and went back to the hotel.