On July 5th, we planned on driving to Chicago and eat lunch at Chuck’s Southern Comforts Cafe, a restaurant featured on Food Network’s Diners, Drive-ins & Dives. Nikki didn’t want to go, but we talked Nick into going with us (he can’t say no to a free lunch, right?) and picked him up in the morning.

The food was good, and we drove to another part of Chicago to eat dessert at Lutz Cafe and Pastry Shop. Their Baumkuchen (“tree cake”) was featured on a different Food Network show (do you think we watch too much Food Network? 😉 ) and it looked so good, I just had to try it! Only problem was that we were so full from lunch, that no one wanted to eat dessert, and we each chose a goodie to take to the hotel with us to eat later. The Baumkuchen tasted just as delicious as it looks!

Here’s a little video that shows how Baumkuchen is made, and how it gets the rings that make it look like a tree

I finally gave in and let Greg pick up some fireworks, so once it got dark outside, we had a little belated 4th of July celebration in an empty parking lot next to the hotel. He let Melissa and Sara set off most of the fireworks – with supervision – while the rest of us watched… and took pictures 😉

Wednesday, July 6th was our last day in Indiana, and we spent it almost entirely with Nick. We finally found the time to stop at our favorite candy store. Simply a MUST every time we’re in Indiana 😉

It was a pretty warm day, and we dropped the chocolate and other candy off at the hotel before playing a round of miniature golf. 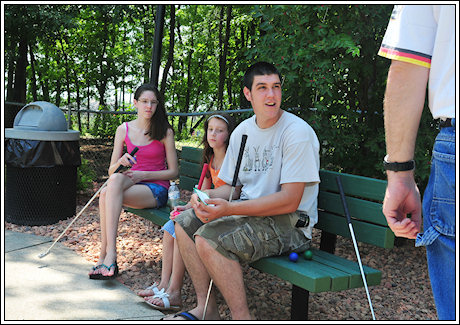 Cameron met us at the hotel after he got off work, but Nikki was nowhere to be seen, and she had ignored our texts and phone calls. Yup, she went a little… umm… “junior high” on us because she got into a fight with Cameron and couldn’t be an adult about it and at least let us or Nick pick up the baby for the day. I have to admit I’m still pretty angry at her for that, since she knew that this was our last day there. Next time we see her, she will be warned not to pull that kind of #&^% again or I will turn into the mother-in-law from hell!
The day ended on a sadder note than it should have. It’s already SO hard to say good-bye, but to not get to see your granddaughter/niece one last time….