On July 5th, we planned on driving to Chicago and eat lunch at Chuck’s Southern Comforts Cafe, a restaurant featured on Food Network’s Diners, Drive-ins & Dives. Nikki didn’t want to go, but we talked Nick into going with us (he can’t say no to a free lunch, right?) and picked him up in the morning. 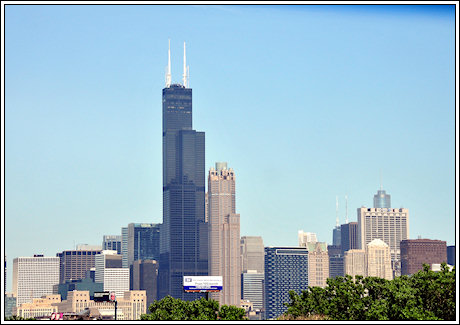 The food was good, and we drove to another part of Chicago to eat dessert at Lutz Cafe and Pastry Shop. Their Baumkuchen (“tree cake”) was featured on a different Food Network show (do you think we watch too much Food Network? 😉 ) and it looked so good, I just had to try it! Only problem was that we were so full from lunch, that no one wanted to eat dessert, and we each chose a goodie to take to the hotel with us to eat later. The Baumkuchen tasted just as delicious as it looks! 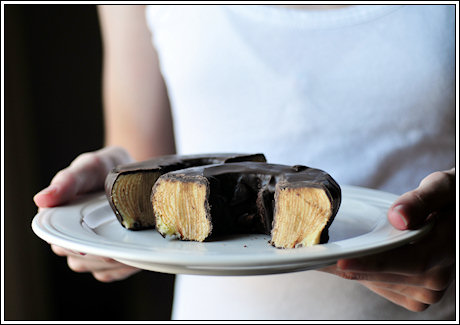 Here’s a little video that shows how Baumkuchen is made, and how it gets the rings that make it look like a tree

I finally gave in and let Greg pick up some fireworks, so once it got dark outside, we had a little belated 4th of July celebration in an empty parking lot next to the hotel. He let Melissa and Sara set off most of the fireworks – with supervision – while the rest of us watched… and took pictures 😉

Wednesday, July 6th was our last day in Indiana, and we spent it almost entirely with Nick. We finally found the time to stop at our favorite candy store. Simply a MUST every time we’re in Indiana 😉 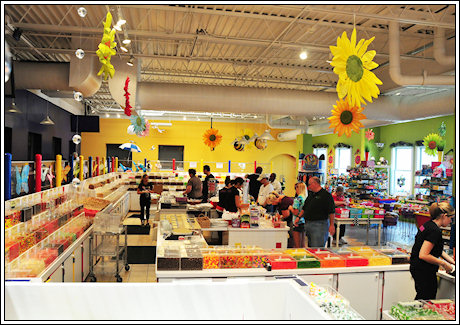 It was a pretty warm day, and we dropped the chocolate and other candy off at the hotel before playing a round of miniature golf.

Cameron met us at the hotel after he got off work, but Nikki was nowhere to be seen, and she had ignored our texts and phone calls. Yup, she went a little… umm… “junior high” on us because she got into a fight with Cameron and couldn’t be an adult about it and at least let us or Nick pick up the baby for the day. I have to admit I’m still pretty angry at her for that, since she knew that this was our last day there. Next time we see her, she will be warned not to pull that kind of #&^% again or I will turn into the mother-in-law from hell!
The day ended on a sadder note than it should have. It’s already SO hard to say good-bye, but to not get to see your granddaughter/niece one last time….

The Indiana part of our trip required a slight change of plans. We had originally planned on arriving Monday and leaving Friday morning. Unfortunately Cameron didn’t know until literally the last minute (as in Saturday!) which days he would be able to take off work. Turned out his days off that week were Monday (and we lost most of the day with him because we were travelling) and Friday, and he was unable to switch them with someone else. So we just made the best of the time we had on Monday, and decided to stay an extra night and leave Saturday morning.
We also tried to get together with Amy, but because I didn’t know in advance which days we would be free, and her week was filling up fast with playdates and out-of-town guests, we couldn’t work anything out. But, there’s always next time, because we will be back (at some point!)

So on Tuesday, August 10, Nikki came up to the hotel around lunch time and we hung out at the hotel pool for a little while and then headed to the Albanese Candy Factory and did some sampling and shopping! You could say it’s become a tradition, since we’ve been there the last three times we were in Indiana! Of course we got plenty of chocolate, and the kids picked out their favorite flavors of gummy bears (btw. their gummies are the only ones that will NOT stick to braces!!)

Cameron came right after work and joined us for dinner. We also celebrated a certain little one’s birthday (a little early) that evening. 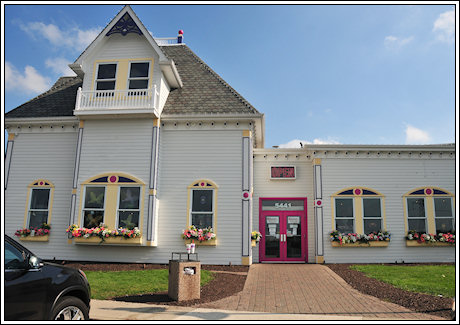 Wednesday, August 11 was pretty unevenful, although we did go to the mall for some baby clothes shopping, and when Cameron met up with us at the hotel after work, we all went to the Olive Garden for dinner.

Couldn’t go all the way to Indiana without making a trip (or two) to Albanese Candy Factory!! One of the many delicious things we bought, were these giant peanut butter cups. They’re so big, they could almost be a whole meal (well, calorie-wise anyway 😉 )
When we were at the store, we sampled a few things, and Melissa was all sad because she really liked the gummy bears last summer, and she can’t have them since she got her braces. One of the sales people overheard us and said that their gummies are the only ones known not to stick to braces! I let Melissa have a sample, and sure enough, they didn’t stick! Of course we bought them a bag full and the kids were happy little campers. Sadly, though, they didn’t have the Figaros (small chocolate squares with a hazelnutty taste), that we bought last summer. 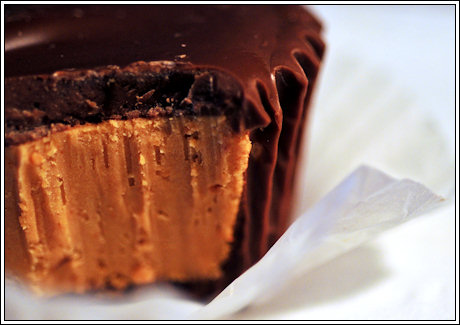 On Sunday, June 28th we hung out at the hotel in the morning and then went to Bakers Square (yum!) for lunch. Cameron was absolutely miserable with his sunburn and the only comfortable shirt he could find to wear, was a long-sleeved button-down shirt. After we got back from lunch, Nikki and I headed to Wal-Mart to look for a different shirt for him. We found a white short-sleeved button-down shirt, and the fabric was softer, too. Back at the hotel I talked Cameron into letting me wet a towel and carefully lay it across his back and shoulders, to cool him off a little. (The Solarcaine and the vinegar-soaked towels that Greg suggested didn’t help much).
The girls had fun with Nick, though, hanging Sara’s toy cell phone on his ear and taking pictures. Nick wasn’t too thrilled, but he was a good sport 🙂

I found a magazine with local attractions, etc. in the hotel room and saw that there was a candy factory nearby, and that afternoon we went and checked it out. The Albanese Candy Factory is every chocoholic’s dream!!!! And what a fun and colorful place! They even give out samples if there’s anything you want to try. We did some sampling, and of course shopping! (Wonder where some of those 4 lbs came from, that I gained back during our trip??), and btw. I loved the shirts that the male employees were wearing. They said EYE CANDY on the back.

After dinner I dragged the kids outside for some pictures, so here they are…. Nick, Sara, Nikki, Cameron, and Melissa.