Sorry for the delay in posting about our vacation, this past week has been a little crazy and it took me a little longer than I wanted, to get all the pictures edited. I took almost 800 but got them weeded down to 449.

Anyway… we left on Friday, March 12. Greg worked from home that day so we could get the car loaded up, I picked up the kids from school a little early, and we were on the road just before 2pm and missed most of rush hour (lots of people leaving work early that day).  I decided to keep the camera packed away, because I knew there wouldn’t be anything interesting to take pictures of. I mean, this is Texas after all. It’s so flat, I bet if I climbed one of the telephone poles, I could have seen all the way to Colorado! 😉
I did have my phone and texted a couple of friends. Thanks Amber and Treva, for saving my life. I would have died of boredom if it wasn’t for you! 😉
We spent the night somewhere in Amarillo, TX and then made it to Colorado Springs, CO by about 3pm on Saturday. We originally planned to take I-40 to Vega, TX, and then take 87 to I-25, but Amber told me that this was a long stretch of nothing and I talked Greg into staying on the highway instead, and I’m so glad he agreed! We did take a little shortcut (84 to I-25) and there was absolutely nothing there! No gas stations, restaurants, and certainly no rest areas.
The drive that day was still boring, but it got a little more interesting once we made it to Colorado, and the mountains.
While in Colorado Springs, we stayed at the Embassy Suites. Very nice hotel. Free, cooked to order breakfast every morning, free happy hour every evening, as well as a restaurant. The kids loved all the waterfalls and the fish in the “stream”. And the glass elevator! I will leave you with some pictures of the hotel at the end of this post, but here are a few more pictures from their website (clicking on the thumbnails on the left will take you to the slide show). # 17, 18, 21, and 23 is pretty much what our room looked liked.
That evening we met up with one of Greg’s co-workers and his family. We had dinner at the hotel restaurant and then went to It’z for some fun. Well, fun for the kids anyway. Us grown-ups found a quit(er) spot and had drinks while the kids got to wear themselves out, although they spent most of the time riding the bumper cars.

Sunday morning we drove around Garden of the Gods – and took pictures! – and then stopped at the Trading Post (aka souvenir shop). A little preview of Garden of the Gods is in my header.
We had reservations to take the cog rail up to Pikes Peak. Greg had made the reservation the day before and we were told that we would not be able to go all the way to the summit because of bad weather. When we got there, they told us that there wasn’t enough interest for the 11:something train and they had moved us to the 1:20pm train. We had plenty of time to kill and went back to the Garden of Gods Trading Post to eat lunch. By the time we got back to the cog rail, it had started snowing (yay!) which made the ride up the mountain that much more fun.  We got seats together, but there were some empty seats, and Greg and Sara moved so they could have window seats, too. I think the summit is about 8 miles up the mountain, but the train stopped just past mile 6 and that’s as far as they could safely go. We were stopped for a few minutes and were allowed to stand up, and that’s when you noticed just how steep it really was!! At one point the train was going up such a steep hill that the front of the train was three stories above the back of the train! Not that we noticed, sitting down.
On the way back, we stopped at Mile 4 and were able to get off the train for a few minutes and enjoy the snow.
It was still kind of early when we got back, and we went in search of the Rocky Mountain Chocolate Factory for some goodies. I have to say, though, the chocolates they sell by the piece behind the counter, is better than the boxed chocolates.
Then we headed back to the hotel for Happy Hour (can’t say no to  free Margarita, after all 😉 ) and then to dinner at Edelweiss. Yummy, German Food!

On Monday we went back to Garden of the Gods for more pictures, and to see what we didn’t see the previous day. It snowed in Colorado Springs overnight, and Garden of the Gods looked even prettier.
We had lunch at the Golden Bee, where the waiters throw sticky little bees (they look like iron-ons, except that they’re sticky) on you when you order. Food was very good! Afterwards we went to Seven Falls, but because of the snow, the steps were closed and we couldn’t walk up. We were able to take the mountain elevator up to a viewing deck across from the falls. The falls looked cool, because they were partially frozen.
Not having being able to climb all those steps to the top of the falls saved us some time and we went back to Manitou Springs to look for the Mineral Springs and sample the water. We didn’t find all of them, and some were too far away to walk to, but the water of most of the ones we found wasn’t all that bad, and probably would have tasted even better if it was colder. One of the springs was inside of a store. It wasn’t a fountain, like the other springs, it was one of those old-timey pumps. This was the only one I refused to try because it smelled so bad!!! Greg said it tasted better than it smelled. By the way, this day was the only day I have ever seen Melissa drink water! She hates water and would rather die of thirst than have a sip of water! I was surprised that she was willing to try the mineral water, although I don’t think either of the kids tried the water from that awful smelling spring.

Tuesday we left Colorado Springs and headed to Estes Park, with a pit stop in Boulder to visit the Celestial Seasonings Tea factory. We sampled some of the teas, took the tour (very interesting, and surprisingly, for being the biggest tea manufacturer in the US, the plant isn’t very big. Unfortunately there were no pictures allowed. Very difficult, with a camera around my neck!!). After the tour we sampled a few more teas, and then ate lunch at their restaurant.
We got to Estes Park just in time to check into the hotel, and then headed downtown for a stroll through the shops and a little snack.

Wednesday we spent most of the day at Rocky Mountain National Park. Beautiful!! We didn’t see it all because they had some roads closed for the winter. We did see some Elk, a coyote, some birds, frozen lakes, and lots of snow. We had stopped at the visitors center before we entered the park, to pick up some maps, and the kids each got an activity book. On the way out of the park, we stopped at the ranger station where the kids became junior rangers 🙂

Thursday morning we checked out of the hotel and headed back to Rocky Mountain National Park, to walk around Sprague Lake. It was cold that morning and we didn’t walk all the way around. Melissa wasn’t feeling that well either, but better than the day before.
Then it was time to head toward home again 😦 Greg didn’t want to drive through Denver again, so we took 34 to 385 to I-70. What a boring, boring drive!! We stopped in Colby, Kansas for the night. Still a loong way from home!

Friday morning was drizzly and extremely windy! So windy, it ripped the rear license plate (which was only a plastic thing with the dealer’s name on it, held on by two screws) right off the car!! Thankfully the temporary tags were taped to the inside of the rear window, and I slappend even more tape on  before we left home. Thankfully the plastic broke off around the screws and didn’t take the screws with it!
We had stopped at the Kansas Welcome Center the day before and got some travel guides and brochures. Greg found some wineries and we stopped at two tasting rooms and walked out with some “souvenirs”. At least there’s something good about boring Kansas 😉
We planned on spending the Night in Oklahoma City and have dinner at one of the restaurants, featured on Diners, Drive-ins and Dives. We ended up at Ingrid’s Kitchen, a German restaurant. Yum!!

Saturday morning, we wanted to visit the National Memorial, but when we woke up it was snowing, freezing cold, road conditions were only going to get worse, and visibility wasn’t all that great. We decided to come back some other time, and head home instead. It was a scary drive! The roads were slippery, and we saw someone lose control right in front of us on the highway. Thankfully they were able to stop on the shoulder and no one was hurt. It was slow going for a while, but the closer we got to home, the better it got because Oklahoma City was on the south end of the storm. We even missed the thunderstorms in the Dallas area…. and got to enjoy seven inches of snow Sunday morning.

Whew! I think that’s all the details of our trip. We’re already planning on going back in the summer, but not until 2011, because this summer we’re going back to Indiana (and then on to somewhere else, not sure where yet, though).

View from our room. 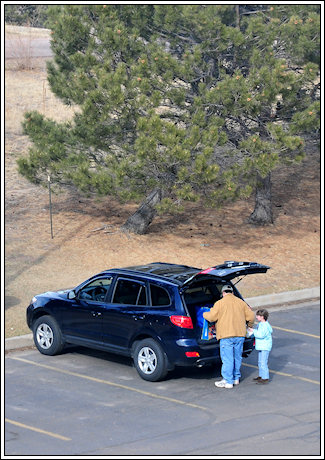 View of the breakfast/happy hour area

Restaurant (hidden behind the greenery on the right) 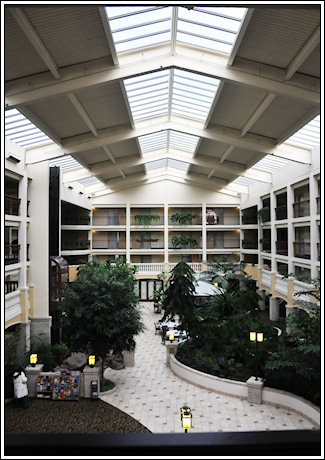 Another view of the breakfast/happy hour area 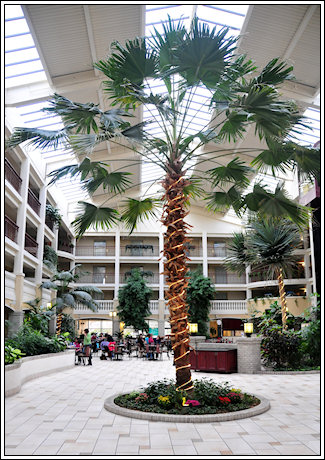 One of the waterfalls 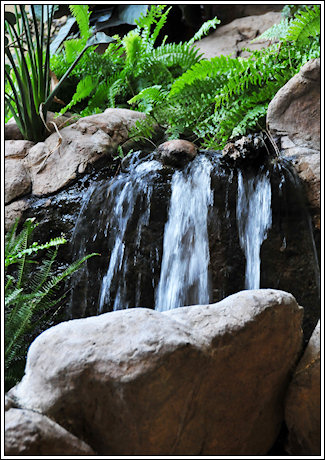 AND… a family picture in the hotel’s exercise room