It was just me at the movies today to see  Brian‘s ugly twin* (aka Jason Statham) in Parker.
For a while it looked like it was going to be a private screening, just for me, but then some other people showed up (darn…that would have been cool!)
The movie was really good!! I enjoyed it and it was definitely worth the price of a movie ticket (and certainly the matinée price!) I didn’t even mind going to see it by myself. The movie was already added it to our Netflix queue, and it’s going to stay. Not just because Greg wants to see it, but because I want to see it again!

I’d like to thank everyone for the Birthday wishes yesterday. I had a pretty good day.
Greg took off from work, and after dropping the kids off at school (he took Sara, I took Melissa), we ran a few errands, and then went to the movies. It’s been waaay too long since we’ve been on a “date”. Pretty sure it was New Year’s Eve 2002, when we were in Maryland, visiting family and my sister-in-law watched Melissa while Greg and I went out to dinner and a movie.
Anyway, we went to see Just Go With It. I loved it, such a funny movie. Greg didn’t complain either.
After the movie we had a little bit of time to go home before it was time to pick up Sara from school and go grocery shopping. Back home for a little bit before getting Melissa from school, and then run another errand before dinner.
Dinner didn’t go quite as planned. I really wanted to try this new restaurant, but it would have taken at least 30 min. to get there from where we were (maybe longer, with all this rush hour traffic), and then there was a good chance that we would have had to wait for a table, and I was just too hungry for that. So, I decided on On The Border instead. We’ll just try the other restaurant another time. 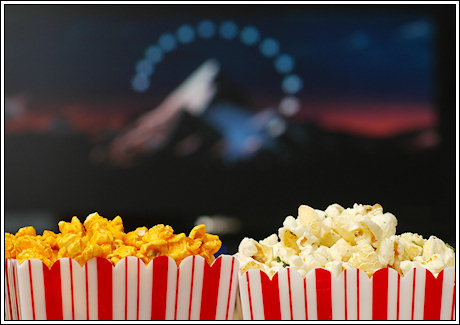 Production cost of the movie “The Water Horse”: about $10 million.

Cost of the DVD after coupon and Best Buy Rewards certificate: $6.99

The look on your daughter’s face when she opens the DVD on her birthday: priceless!

For everything else there’s Mastercard.

She was so surprised to get that movie, that she whipped it around so fast to show sissy, that I was lucky to catch just a small corner of it.