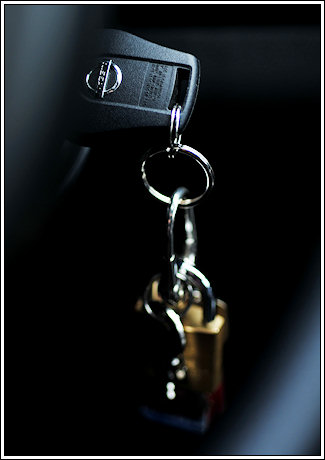 One of many reasons I don’t like rain… I have to pick Sara up in the carpool lane, which means I have to get in line at least 30 minutes before school lets out or there are so many cars there, the end of the line is somewhere way down the street.  It’s boring, waiting there, and sometimes I bother my friends and family with texts, but this time I decided to bring the camera and take pictures to kill the time.

STILL NOT FIXED!!!! They’ve replaced the wiring harness this time, but that didn’t help. And again.. the easiest and cheapest thing (re-flashing the computer) was NOT done. They’re just a bunch of incompetent morons at this place.

Two pictures I took this morning. Started the car, fuel gauge showed full. Turned the car around to face it the other way, turned off ignition and immediately started the car again… fuel gauge shows one notch below 3/4 tank. That’s some crappy gas mileage if driving less than 0.2 miles uses 1/4 tank of gas!

We’re DONE with this place now. We will be calling Nissan Consumer Affairs to give them an update, and to let them know that we will be taking the car to a different dealer. At least all the things they broke/scratched are fixed. 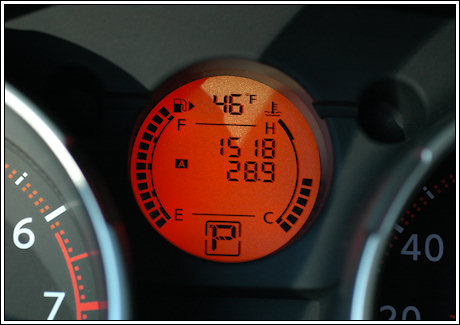 The car is going back to the dealer today so they can fix what they broke while they were busy not fixing what was wrong with it, and to give them one last chance to fix the real problem before we take it somewhere else.

We’ve had the car back for about three weeks, and in that time Greg called Nissan Consumer Affairs and filed a complaint against the dealer. Told Nissan C.A. what they put us through, and that they actually tried to tell us that our problem was “normal” and that digital gauges all work like that. Too bad we knew for a fact and from personal experience that they do notwork like that, and Nissan Consumer Affairs came to the same conclusion when they did some research. They called the dealer and ordered them to fix the car, and when (or should I say if?) it is fixed, Nissan C.A. is supposed to make us some kind of offer.  To be continued….

This is how I’ve been driving around the past three weeks. Unfortunately the dealer name didn’t fit, so this has to be good enough.

I have to add that I talked to my 19-year-old son (who is in college learning car mechanics) and his first thought when I told him about the car, was that there might be some bad wiring, or that they may need to re-flash the computer. The very two things that the dealer has refused to do, because that can’t possibly be it!!! (They are finally replacing the wiring harness) Sad, when a 19-year-old college kid is smarter than a mechanic who’s been doing this for years!

The car is still not fixed. It’s been in the shop since…. I don’t even remember when. Over a week? They called last Friday and asked Greg to bring back the rental, and they would give him another Rogue to drive. Same model as ours with almost the exact same options (they actually were the same, but this blue one had a couple hundred Dollars worth or more options than ours). They said they wanted us to drive it so we could see what the gauges do, and guess what?! Same problems!!!! Then they try to tell us, oh, that’s normal! Uh-huh, yeah. I think NOT! Because the Nissan Frontier that we had as a loaner didn’t do it, the Nissan Quest they gave us as a loaner, didn’t do it, and the Quest we used to own a few years ago didn’t do it either!! It’s NOT normal! Over the week-end I searched online and found a Nissan forum where people were having the same problems with theirs, and at least one person got his fixed. Greg printed that out, and also went searching for some solutions and found a field manual to download, explaining exactly what needs to be done, as far as testing and repair.  He took all those printouts to the dealer today when we took the blue Rogue back, and gave them to the service advisor.  He came back, saying that they need to call Nissan tech support and see what they say, and ask permission to replace the problem part (what??? Ask permission to fix the car??).  At one point he even talked to the owner of the dealership, who told him that he would have taken the car back and refunded us all our money – IF the plates hadn’t been in yet (they came in on Saturday), and if we hadn’t already made our first payment. Great! Couldn’t he just pretend that the plates didn’t come in until this afternoon (after he took the car back) and give us a check for the full purchase amount, including down payment, so we could have paid it off? I really don’t see where the fact that we already made a payment makes a difference. In the end, they gave us $50 in gas cards and sent us home in our car, while they ask for permission to fix it. Probably hoping that we either give up, or decide to take it somewhere else, but neither is going to happen. I’m soooo tempted to buy that automotive window paint and write “Don’t buy at Nissan of (town name)” on the back window!

Have you ever driven five different cars in about two weeks? I have! All because of our brand new Rogue. Greg drove six cars in those two weeks!

Of course I drove my Santa Fe (car #1), that we traded in for the Rogue. Got to drive the Rogue (car #2) for about a week and then Greg dropped it off at the Nissan dealer when the car was exactly one week old, to get some scratches fixed that were on the front bumper when we bought it, and to get a rear bumper protector put on. In the week that we had it, we noticed that the outside temperature display was off by quite a bit, and the gas gauge was going a little crazy. It would show a full tank of gas one time, then I would park it in front of my house, and next time I started it up, it would show 3/4 tank and slowly move up to full. It would go back and forth, depending on which way the car was facing when it was parked in front of the house.  Greg asked the mechanics to check those things out when he dropped off the car. I drove Greg’s shoebox (car #3) that day and Greg got to drive a Nissan Frontier, that he got as a rental/loaner. We picked up the Rogue that evening… you’d never know there were any scratches, and the bumper guard looked great. The temperature display? NOT fixed! On the sheet of paper they give you, it said that they had to special order the part, but nothing about when it was expected in. They never did find a problem with the gas gauge (doubtful they really checked).  Our salesman said he would have the mechanic, who had already gone home, call us the next day. Did he? Nope. Greg called and left messages, never heard back, and he never called back on Monday either. Tuesday Greg was getting a little pissed, called and left another message, and then called the service manager and gave him a piece of his mind. Said that if we don’t get that car fixed, they will be replacing it for us. And wouldn’t you know it, not 30 minutes later, the mechanic calls back and tells us that we could drop the car off the next day and they would try to figure out what was wrong with the gas gauge while they waited on the part for the temperature display. Meanwhile we had driven about 85 miles since the last fill-up and the gas gauge still showed a full tank! Yeah…. wouldn’t it be nice if it got that kind of gas mileage? Something was obviously not right! So Greg dropped it off Wednesday morning before he went to work and got a piece of crap Nissan Sentra as a rental/loaner. Car #4 that I got to drive. The temperature gauge part was in Thursday, and by Friday they had the gas gauge fixed and we picked it up that evening. They even sent us home with a full tank of gas (or at least that’s what it looked like). Everything seemed fine… temperature seemed about right, and the gas gauge wasn’t going crazy either. Same on Saturday morning when we went grocery shopping. Then we put it to the real test and parked it facing the other direction (east) when we got home. A couple of hours later we had to run another errand, and… we’re at 3/4 tank! No, there’s no gas leak anywhere, and we parked it facing west, and when we left to go to Sara’s soccer game, we had a full tank of gas again… and the temperature display was off again, too! It showed 73 degrees, when it was really about 85. Greg had made some phone calls to the service department and never got a call back. Then he tried the service manager again, who told him that we would have to set it up for Monday because he didn’t have a loaner for us, but Greg told him that we would be dropping the car off that afternoon and he would just have to give us a rental. And he would have to pay for the gas, too! We went right after Sara’s game and dropped the car off.  Greg made it clear that he expects the problem to be fixed this time. If they think they have it fixed, check again and make sure it’s fixed. And if we have to bring the car back a fourth time, they will be replacing it with a new one! The rental this time? A Nissan Quest (car #5).  Hopefully this will be the last rental/loaner for a while!

We traded in my Santa Fe for a 2008 Nissan Rogue SL yesterday. LOVE my new car!!! I would have been happy with just the basic S model, but Greg just had to have the SL because it had a few minor little extras that the S model didn’t have (it’s a man thing I guess… but wait, isn’t this supposed to me my car?)

We didn’t get home until about 7:30 pm, so I only snapped a couple of really quick pics. I’ll have to try and get some better ones in the next few days.

We’re trading in my car for a new one in the next few months or so. Getting something a little more fuel efficient than my 17mpg gas guzzler.

His choice and her choice. Should be my choice, right? Since it’s my car! Feel free to guess which one is which 😉 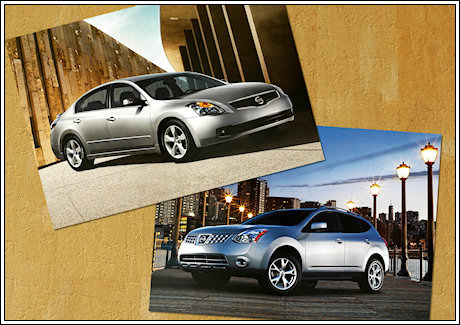