Time for another mug shot, so you didn’t think I ran out 😉

This was obviously a souvenir from San Francisco, and yes, I like my coffee with with whipped cream… or flavored creamer. 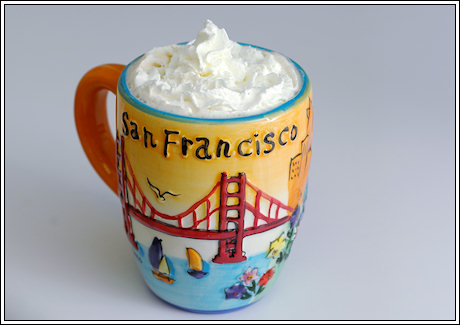 I left found my heart in San Francisco…

This whole pile came from the same place, Baker Beach in San Francisco, right next to Golden Gate Bridge.  There are almost no seashells on this beach, but plenty of rocks. While walking along, I kept looking for a heart-shaped rock, and was lucky enough to find one…. and then I found part of the inside of a seashell that looked like a heart.

June 15th was the first day of the end of our vacation. Time to slowly make our way back east and towards home. Greg had to leave on a business trip to Colorado Springs on June 22 and we wanted a few days at home before he had to leave, otherwise we would have planned to be home on the 21st. On one of his business trips to San Francisco, he drove around and ended up in Sausalito and he really liked, so that is where we went that morning, bright and early. We crossed the Golden Gate Bridge – twice! Not that we saw much of it because it was completely fogged in!

Sausalitowas very nice. We just drove around… and then went through a car wash at a gas station because the car really needed it. It was nice, being able to take pictures through clean windows again, at least for a little while, until they got all dirty again with dust and bug splat. We crossed the Bay Bridge, too, on the bottom level. Not all that interesting, and it’s not as pretty as the Golden Gate Bridge. The drive that day was loooong and very boring, especially the part where we drove through the Mojave Desert. We made it to Barstowe, California that day and probably would have made it a little farther than that, had the stupid GPS thingie not sent us driving in circles!! Grrr!!! That story deserves it’s on spotlight on this blog, so stay tuned! Here is a picture of somewhere in the Mojave Desert *yawn*

June 16th we left California behind and drove through the Arizona desert and spent the afternoon at the Grand Canyon. That is one big huge hole in the ground! No hiking for us, it was way too hot for that and I preferred walking around in my flip-flops. Not exactly hiking boots. We did it the easy way and drove from overlook to overlook, although we didn’t stop at every one of them.  Not sure at which one I took this picture

but this one was taken at our last stop, the Watchtower. What a great view from up there! It was getting late in the evening by then so most of the canyon was in shadows. Made for a nice view of the Colorado River, though.

We would have liked to stay at one of the lodges at the Grand Canyon, but the one we checked out was a little pricey, so we decided to look for a hotel in Flagstaff. There must have been something going on because we checked at several hotels and they had no rooms available.  We had no choice but to drive a little more, and ended up in Winslow, Arizona for the night.

Time for the next vacation chapter 🙂

On June 12th we drove to Solvang, a cute little Danish village. We walked through town, browsed through some shops, and stopped at a bakery to get a little snack. There were several wine tasting rooms and Greg really wanted to do some tasting, but then agreed with me that it was a little too early to “drink”. As a matter of fact, we didn’t stop at ANY of the wineries on this whole trip! 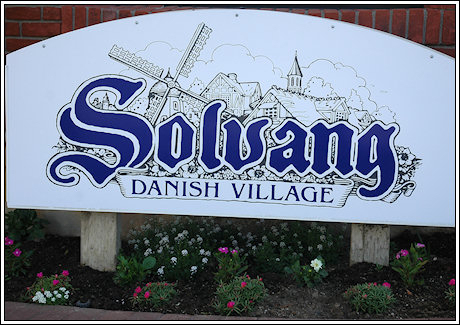 We stopped at Pismo Beach to collect some seashells and found lots of bits and pieces of sand dollars. Greg was lucky enough to find a whole one! I still have not checked to see if it survived the rest of the trip…. I need to bleach those stinky seashells soon! They’re all in ziplock bags right now. We stopped at a few other beaches, too, to take pictures. No swimming because it was chilly and windy, and the water was freezing cold. There was one beach (although you couldn’t really get to it because it was fenced off) where you could watch elephant seals. Finally an opportunity to dig out my big lens and use it.

And of course I had to take pictures at Big Sur. What a beautiful place! The sun came out for a little while, too, and what a difference it made! Those pictures just wouldn’t have been the same on a gray and cloudy day. 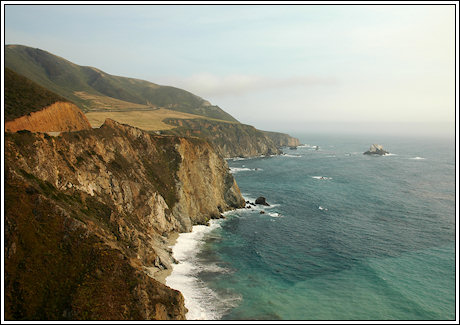 We spent the night in Monterey and continued to head north the next day, Friday, June 13th.  Again, we took the time to stop at a few beaches to take pictures and let the girls run and play. They were over wanting to swim in the ocean… I kept asking if they wanted to, and every time the answer was “no!!!” Wonder why??  All they cared about was building sand castles, except that they forgot all their sand toys at home and had to improvise. They looked for small logs, arranged them in a square, and covered them with sand. 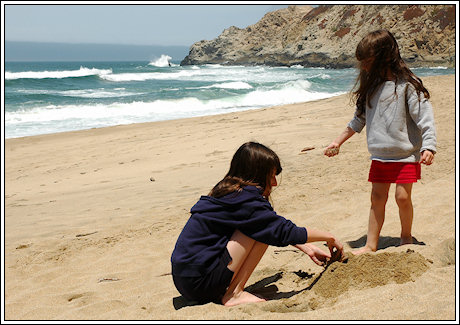 This was the day when we finally made it to San Francisco! What a crazy city. Traffic was nuts, and I’m so glad I didn’t have to do any driving. Forget being a “city girl”, I’ll stick with small town! The only sight-seeing we did was Golden Gate Bridge, since we were very close to it. Unfortunately it was very foggy and we couldn’t see much of the bridge at all. Still took a few pictures, just in case this would be the only opportunity and there was even more fog the next time.

We had to pay for parking (darn parking meters again) and had some time left after trying to find the bridge in the fog, so we browsed through the souvenir shop and found a map of downtown San Francisco with all the points of interest, etc.  Next order of business was finding a hotel. Greg found one on the map that was downtown, but far enough away from all the tourist attractions to hopefully be reasonably priced. We get there and they had mandatory valet parking – not too happy about that!! Greg goes into the lobby to inquire about a room while we waited in the car. When he came back out, he said that a German motorcycle gang just took the last of the rooms (yay!!) and we went looking somewhere else. Ended up near the airport, away from the crazy busy downtown streets (ahhh!) and got a room at the first hotel we stopped. Haul all of our stuff to the second floor and just about get knocked over when we open the door to the room – it was a smoking room!! YUCK!!! Greg went to see if they could switch us but it was the only room they had left so we drove down the street to the next hotel and finally got a room. Non-smoking! Bad thing there was that they didn’t have a guest laundry, but we still had enough clean clothes left to last us a couple of days. For dinner, Greg found another diner that was featured on Food Network’s “Diners, Drive-ins and Dives”. Grubstake Diner. Good food there, too.

June 14th  we spent all day in San Francisco. Left the hotel not long after breakfast and drove to Seal Rock first. I don’t know why they call it that because there were no seals anywhere, just lots and lots of birds. We found Baker Beach, which is right next to Golden Gate Bridge and although it was a cloudy morning, there was very little fog and we actually got to SEE the bridge! I would have loved a little bit of sunshine for more of a “postcard” picture, but I was happy that it wasn’t fogged in like the day before. 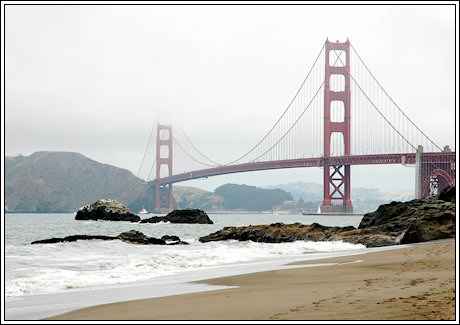 I talked Greg into driving to the top of the bridge, too, but it was very crowded and we couldn’t find a place to park. He drove around the parking lot while I ran up to the bridge for some pictures and then met him again in the parking lot.  Then we drove around the city, went down Lombard Street, which was really cool, but the pictures didn’t turn out like I hoped. I knew that right away. The shoebox is just too close to the ground to be able to see the turns, and there was no place to park – or stop – and get out to take pictures. When we were stopped at a red light at the bottom, we did see a cable car go by (never did ride one) and I just had to share this picture…. the guy leaning over to take a picture was just too funny! 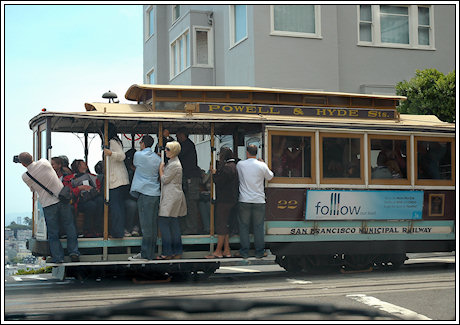 We spent a few hours at Fisherman’s Wharf, including lunch, and then went to find Alamo Square to take pictures of the Victorian houses. There was a playground, too, and Greg took the girls there while I walked around and snapped away. Got some of the girls playing, too. They looked funny in their long pants, jackets, and… bare feet! They were wearing flip-flops and kicked them off at the playground. 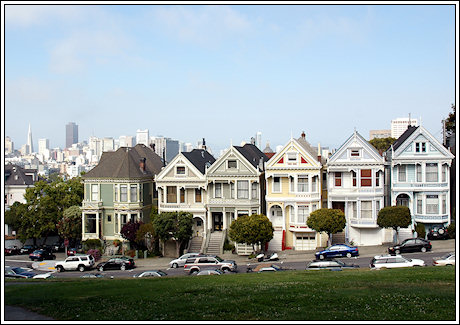 It was still a little early for dinner, and we were all still full from lunch, which we ate a little later than usual, so we drove to Lake Merced and spent a little time there. For dinner we went to Joe’s Cable Car… yup, another diner that was featured on “Diners, Drive-ins and Dives”. On the way back to the hotel, I got some really cool fog pictures, you could actually SEE the fog roll down the hills! 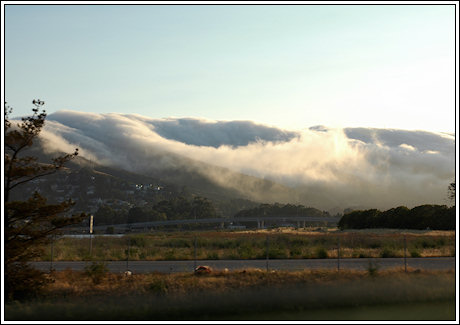