On Saturday, July 9th, we took the scenic route (aka US 23) along Lake Huron in search for some lighthouses.  We still keep a road atlas in the car, and thanks to that, we knew where they were. Gravelly Shoal was the first one on our route, in Point Lookout, and without knowing exactly where, we made our way to the lake shore. We got lucky and found it, but it was just a little thing waaaaayyyy out in the water. We parked at the end of the street and walked closer to the water for some pictures, and see this woman pass us on her bicycle. She was probably wondering what we were doing, since this was just a little neighborhood. And sure enough, she stops and asks “are you really from Texas??” (“No, we’re aliens, but shhh, don’t tell!” We didn’t say that to her, though)  She was really nice, and told us about all kinds of things to see and do.

We did find some pretty lighthouses, like Tawas Point Lighthouse. It’s one of many that are in a State Park, and Greg went ahead and bought the yearly sticker, that’s valid at all the State Parks all year long. We just made it a point to visit as many State Parks as we could on this trip.

After the lighthouse, the kids got to spend some time at the playground before they had to sit in the car again.

Our next lighthouse stop was Sturgeon Point Lighthouse. Walking to the lighthouse from the parking lot, we passed Old Bailey School House and went inside for a little lesson. Didn’t want the kids to forget that the new school year is just around the corner!

The lighthouse was open for tours, and after viewing the living quarters, we climbed the spiral staircase to the top of the tower. 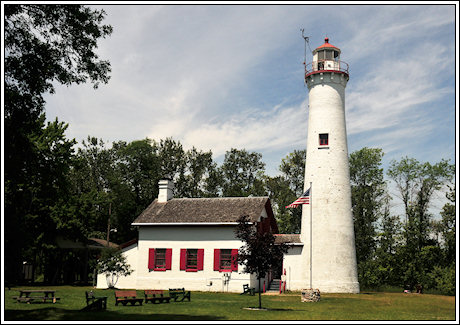 After climbing back down, we walked to the lake to look for petoskey stones, and actually found a few! Melissa seems to have a radar for those, because she wasn’t even really looking, and found several! Poor Sara didn’t have much luck, and she just looked for any kind of pretty rocks and seashells, and Melissa was sweet enough to give her one of the petoskey stones she found.

Our last lighthouse stop of the day was Forty Mile Point Lighthouse, and then ended our day in Mackinaw City.